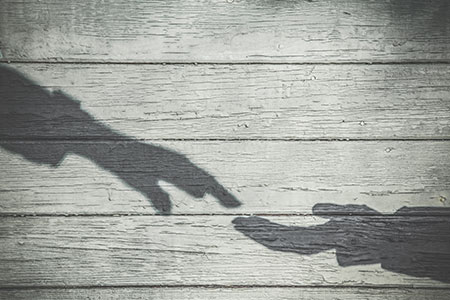 Have you ever felt like you’ve known someone before—in another life you lived before you were born as the person you are now? I have. And the people I felt that way about turned out to be some of the most important ones in my life.

The first person that comes to mind is a childhood friend I met when I was 9 or 10. She seemed so familiar right from the start—I just felt like I already knew her. And she understood me so implicitly; we could laugh and cry together, share secrets and behave outrageously together. Even before I was old enough to consider a belief in reincarnation, I knew we had known each other before. Our friendship ended up lasting for over 20 years.

Even more uncanny was the experience I had with a man I fell in love with in my mid-20’s. Powerfully drawn to each other from the start, we spent a huge amount of time together; we always had so much to talk about. There was genuine love and tenderness between us, but he wasn’t able to give me the romantic relationship I wanted. One night, as I was lamenting once again over this man I couldn’t have, an unexpected, intense flash of knowing came to me.

I realized we had loved each other long before we ever met in this life; I sensed the numerous lives we had been through together. Our purpose, I knew, had been to explore all the different configurations of love: husband and wife, brother and sister, parent and child, friend and friend. In this life, we were simply experiencing another configuration. This didn’t provide an instant solution to my pain, by any means. But I think it really did help me move on.

I guess it isn’t surprising that my most intense reincarnational experience involved my husband-to-be. The story of how we met—on a tropical island, far from our homes in different parts of the US—Is amazing enough. And then there’s the flash of intuition that impelled him to approach me on the night we met. Suffice it to say, our relationship was powerful from the start. Just a few hours after we met, the nearness of him already seemed so familiar. Our minds just seemed to spark and dance together when we talked. And by the second night, I knew I was falling in love with him.

In the following months, we dated mostly by phone and letter. One time, when we were chatting on the phone, I admitted I had the feeling we’d known each other before. He told me he felt the same way. And then I had a vivid flash of another life where we had been together.

I actually saw what I had looked like; I was the male that time, a broad husky man with dark, dense hair and beard. I was the protector and helpmate—and I realized that one of my husband-to-be’s reasons for coming into my present life was to return the favor. I knew, too, that we had acted out this pattern through a series of lives, taking turns taking care of each other.

As I began to tell him all that, he floored me by filling in pieces of the story before I could say them. He even described my physical appearance in that life, just as I had seen it in my mind! I’d already had the idea that our relationship would be extraordinary, but that conversation convinced me even more. Now, over 33 years later, we’re still together, and we’re still the kind of couple that people notice, because we seem unusually close. Funny how that turned out…

Do I really believe that I knew these people in other lives? Yes! I suspect that all of us live many lives in this vast, richly creative Universe of ours—and that, if we open our minds, we can discern pieces of our own amazing histories. We would probably discover that we’re all much more deeply connected than we ever thought possible.